Downed almost a month ago, the MH-17 airliner tragedy was given the impact scale of the assassination of Archduke Ferdinand, it should have gathered strengthening outrage and grown into a justifiably scandalous international event, but somehow this didn’t happen. The world has still to get a clear answer to the question “who shot down this airliner?” And the investigation by the media has been slothful at best.

Let’s sort out what we already know. 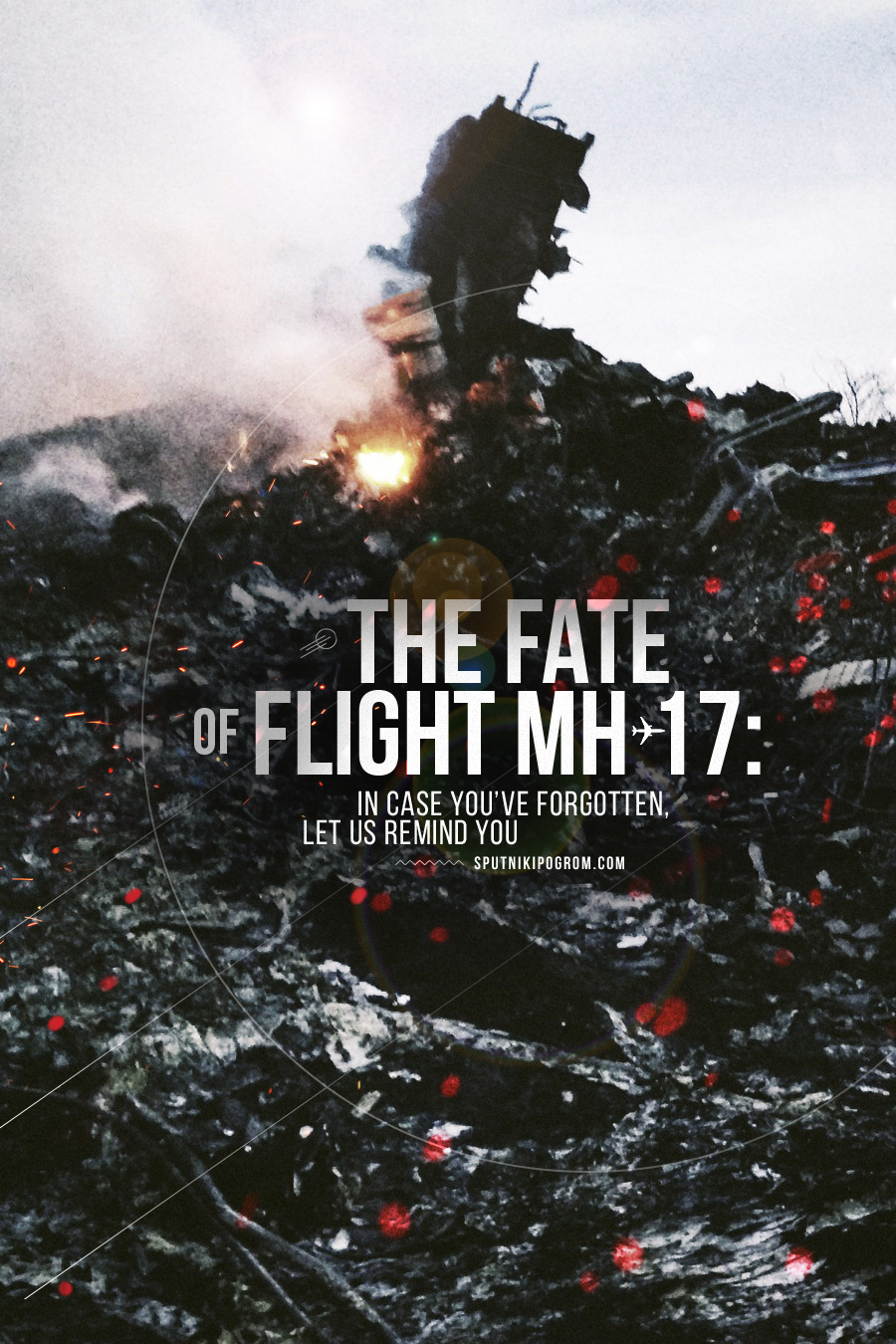 To begin with, the Americans have not provided the satellite images that could have become decisive evidence of Russian involvement in the tragedy, or at least show the guilt of the Donbass militias. To date, America’s charges are as follows:

— Satellites of the United States, according to the Americans, spotted a smoke trail from a rocket fired from the territory controlled by militias. The claim is strong (but not definitive: it is necessary to prove that the missile in fact hit the airliner), but the potential strength of this claim is offset by the fact that these American military and intelligence images are not being shown, referring to security reasons (sic!). It is worth noting that all this is happening against the backdrop of an ongoing domestic American political debate concerning the effectiveness of the U.S. military intelligence, which managed to miss the invasion of the “polite people” in Crimea, and the highly successful ISIS offensive in Iraq. One gets the impression that the argument as well as any pictures doesn’t actually exist. It is a statement spun for domestic consumption in the United States, the desire to show that “we are capable, we might have not seen or may have overlooked those little groups of ISIS brothers near Baghdad, but we darn sure spotted a rocket over Donbass.” A couple of pictures have since been published, but again they were not clear nor were they the alleged “in flagrante” pictures as these were taken after the disaster (at any rate the Americans haven’t responded to the simple fact that the recorded weather conditions in the pictures do not correspond to recorded conditions at the time when they were supposedly taken);

— Proof from the social networks. Sounds ridiculous, of course, but we here on “Sputnik”, if you recall, also grew out of social networking sites, so let’s look at what the Americans found. There is a screenshot from “Strelkov’s Newsgroups” on “Vkontakte”, where militias write that they shot down a transport plane in the area where the Malaysian airliner was flying, that is, presumably, the militia shot down a passenger plane, mistaking it for a Ukrainian military plane. There is an audio recording released by the Ukrainian Security Service, where militias allegedly discuss how the plane was shot down. These examples, especially the “Vkontakte” item, are specifically weak, akin to graffiti on walls, the authenticity of these examples has so far and to date not been proven, and, it seems, are securely forgotten now.

Worst of all is that this prosecution was based on the theory that the rebel militia fired a “Buk” rocket at the plane, but they had no “Buk” system with them, and the Ukrainian statements claiming they had stolen such a missile system from the Ukrainian army have been refuted by the Ukrainian Prosecutor General Vitaly Yarema.

The most intriguing part in the history of the flight is the fact that the plane mysteriously ended up in a war zone, which for some time prior was declared a “no-fly zone”. It is known that the plane veered off course to avoid a storm, but then the question arises: why the pilots felt safer to fly through a no-fly zone where people are fighting? Perhaps Malaysia doesn’t recognize Ukraine as a state? It might be that it was simply pilot carelessness: commercial airlines often fly over a war zone rather than “hook” around it (and thus spend less fuel).

Very few airplanes fly in the airspace over Ukraine these days

The investigation is moving so-so: black boxes have been sent to London (!), nothing particularly interesting has been found (!!), a team of investigators brought to the scene of the accident were taken away very quickly, citing the difficulty of conducting an investigation in a combat zone, no clear evidence was found then or now. In part, this may be because “too many cooks spoil the broth”: experts from 13 countries are involved in the investigation — 11 “fatherlanders” came for the bodies of their citizens and to answer questions about the true cause of the accident, plus a few Ukraine and Russia representatives. It is clear that even in more peaceful times it would be very difficult to get 13 very different countries to work together on an investigation, and during a civil war in the Ukraine conducting a normal, fully complete investigation is very difficult. But even if theoretically one were to say that the plane was shot down by militias using weapons supplied to them by Russia, can one then judge and convict Russia? Everything of course is possible, however, in 1986, the UN International Court of Justice ruled that despite the fact that the CIA supplied arms for the “Contras” in Nicaragua, America bears no responsibility or culpability for their use or actions.

Meanwhile all parties have been quiet. And to many in the United States this seems highly suspicious: for example, the well-known American conservative Ron Paul believes that the American government is hiding something. A well-known American journalist Robert Parry (who told the world about the very same scam with Iran and earlier with the “Contras”) thinks that the Americans do not have evidence against Russia or the militias, but found and have something even more terribly damning (by the way, I recommend our readers to take a look at his interview).

Then there are the circus-like reports about some “Ukrainian deserters” who either helped the militias to bring down the airliner or decided to blow it out of the sky personally, but judging by the sulky silence from the main actors (mostly the EU and the US), please don’t rush to accuse even the Donbass militias for what happened. The charges that may emerge next is that the Ukrainian Armed Forces either through stupidity or malice downed the airliner and the United States are trying to gloss this over by attempting to shift blame onto the militia and Russia, but it’s turning out badly. This is supported by both the absence of comprehensive evidence and sudden changes in both the rhetoric and tone of Western politicians and media (replete with indiscriminate accusations of Russia for news about relatives of those who died, and “about anything, only not about the investigation”).

In 2001, Ukraine was involved in a similar scandal when the Ukrainian armed forces conducting launch exercises shot down a Russian aircraft — a fact still denied by Kiev. Such a scandal, as we have said, is advantageous for Kiev: the country is waiting to collapse, the war in the east is going very badly, and such a scandal only benefits Poroshenko in that it may provoke NATO into taking action (despite the apparent reluctance of Europe and thanks to the combativeness of the USA). Therefore, media coverage of the tragedy of Flight MH-17 has come to naught: Americans do not want to blame the Ukraine, and the conduct of a too intensive investigation and active excavations may shed light on the very, very ugly deeds of both Ukrainians and the Americans themselves. But this is just our theory, and certainly not the ultimate truth.

Again, almost no new information is available, and even that which we do have is unsupported and contradictory, so all interested parties much prefer to remain silent, hence this investigation may very well drag on for years.