If  is you are to believe professor Walter Russel Mead and his Foreign Affairs article, the one named “The Return of Geopolitics”, now is the moment when three revisionist powers – China, Iran and Russia – are trying to renegotiate the liberal world order that came into being in the aftermath of the Cold War. Right before the fall of the Soviet Union Francis Fukuyama heralded “the end of history”, a universal victory of liberal democracies that was supposed to make military conflicts pointless and unprofitable, usher the world into a new era of globalization, shared values and international trade, and make it, for all purposes, timeless. I like human rights, you like human rights, so why fight? Moreover, we both have voters, those voters are anti-war (it is hard to let the dogs of war slip if both sides are liberal democracies), no one will vote for conflict, and so the winning move for the political class becomes rejecting war altogether, or at least relocating it to the Third World, to Middle-Eastern sands and Afghan mountains (together with vague promises of building a liberal democracy even there someday).

This is, if one is to believe professor Mead, the new post-USSR world order that Russia, Iran and China are striving to change today. Iran is disadvantaged by all the support USA gives to Sunni states – it has the potential to be at the very least a regional power, but to use it, it first has to demolish the existing balance of power in the Middle East. China dreams of recapturing Taiwan and making the whole of Asia Pacific its sphere of influence, fervently constructing a blue water navy, trying to compensate for lack of soft power by money and weapons. Russia wants to restore the USSR and to take back the lost influence over the ex-Soviet states by severing their ties with the West. All three are a challenge for the established order, for they do not fit into the liberal-democratic world where nations have a right to self-determination, and, in case this right is somehow threatened, are supposed to appeal to the rightful guardian of this world, the United States of America.

It is obvious, professor Mead notes, that a union of China, Iran and Russia won’t be able to break the new world order, but for the time being it will slow down the end of history, painting the world in the familiar colors of conflict, good old grand power struggle and unhinged desire for domination. His logic is convincing. But if we put aside China and Iran (I’m not an expert on what internal processes go on there, so I can’t really comment), it becomes rather obvious that the End of History had already happened in Russia, a long time ago. It is the recent Ukrainian crisis that demonstrates this quite clearly.

First of all, right from the start in1991, Russian Federation had renounced big ideas, big plans and big projects; in fact, anything bigger than human life and human rights. Everything official ever published about the much feared Eurasian Union never gives a reason to doubt that it is nothing but a glorified trade pact, an Asian EU knockoff lacking any specific ideology and built on nothing but profit for all of its members. Annexation of Crimea? It was, as you may remember, declared an answer to a democratic liberal referendum, a direct realization of the self-determination right that lies in the very foundation of modern world. “Reconquista”, “irridenta” — all these things were mentioned at one time, but in a slightly ashamed patter that made it clear: putinist Russia doesn’t really have “ideas” as such; that it, in fact, wants nothing but to play by the established rules. “Don’t get any ideas, you people.”

Further: European sanctions, the horror of possible European sanctions and of being thrown out of the system, are perceived as nothing short of an impending Apocalypse – mostly because no one is suggesting an alternative value system. “Doubling the GDP” and “selling natural gas to China” — this isn’t really an answer to the Western model; it is, if anything, a faithful implementation of it. “Outlawing gay propaganda”, “going back to the Christian foundations of society” or what have you is also not much of a challenge to the liberal values, rather your run-of-the-mill campaign promises of a Tea Party redneck senator who will forget his disdain for the Federal government the minute he gets to Washington (or, in case of Putin, will forget his hate for OSCE, PACE and UNSC the moment he needs them again). “Challenge to the modern world” ends where the gas pipeline to Germany begins.

On top of that, “developed putinism” had so far failed to conceptualize itself, to produce a coherent ideology that could be used to oppose the liberal West. “I want you to be like Putin” [A once popular Russian pop song] — that’s your ideology, there, and it only emphasizes the lack of global ambition, because there is certainly not enough Putin for everyone, putinism being a personalist dictatorship that cannot be effectively reproduced abroad (as opposed to democracy, communism and such). Same problem is evident in China and Iran – they have nothing to offer to their neighbors: no grand plan, no utopia capable of outshining liberal democracy. Even the elaborate ritualized farce of Putin’s reelections is repeated over and over – not as an attempt to fool anyone, really, but because the people in charge simply do not know and do not want to know any other means of presenting themselves to the outside world.

Fourthly, if Ukranian crisis has demonstrated anything already, it is the complete and cozy inclusion of Russian Federation into the liberal world order – Ukrainians demanded a democratic western Ukraine, and the only answer Russian intellectual class could come up with was a halfhearted attempt to brand them Nazis (and gay). Even when fighting for Ukraine, an image of the future was absent, and most anti-EU arguments still appealed to the economic side of things; no one was even trying to build an alternative discourse. “Nazis and eurosodomites, we will cut your natural gas supply” — sorry, that doesn’t pass for an alternative to the liberal dream (and still is European – during the debt crisis the Greek also had much to say about Germany and nazism).

The End of History that happened in Russia is, perhaps, even more final and irreversible than the one in the West, because at the end of the day Russia has turned into a loose conglomerate of competing corporations and cast-based structures that adhere to the logic of big business and hence have no interest in nation or civic society; nor in producing big ideas and grand perspectives that could potentially wake the nation up and lead it forward. Ideas and social structures they guide are out of businesses’ spectrum of interest or control, and as such are only a hindrance to the perpetual exchange of goods and money. Ukrainian crisis is not the Sleeping Bear waking up, it is a retaliation against a hostile takeover of Ukrainian property that belongs to the all-powerful Kremlin corporations: pragmatic, boring and rational. Americans, who somehow continue to sincerely believe in God, national interests and their special place in the world, may view this way of thinking as primitive, way too simplistic, but Russia had once lived for 8 years on nothing but a self-contained promise of “doubling the GDP” — ridiculous for a modern nation-state propaganda, but entirely logical from a corporate standpoint. “Doubling the KPI, what of it?”

After the infamous GDP doubling we’d witness “modernization”, just as meaningless, then “stability”, and now we are finally left with a gaping emptiness, barely covered by a dozen assorted quotes from the classics of Russian conservative thought, that in the end amount mostly to “please don’t overthrow Vladimir, it could bring chaos… and, well… other horrible things?” “Putin, remember to feed the cat and try not to touch anything expensive.” — as deep as that may be, it’s not really a match for the liberal world order (sorry).

It would have been beautiful if we really had some sort of a national elite that had been gathering its assorted strengths for the past 20 years and then started a struggle to reconquer the past fame and glory of Russia; unfortunately, these people aren’t even capable of explaining themselves. “One day I’ll leave you, and THEN you’ll see, you ungrateful swine” — that pretty much sums up the entirety of putinist ideology.

Sorry to disappoint you, professor Mead, but the History in Russia is over for good – lights are out, people are queuing in front of the cloakroom. There is one guy – camo, AK, sunglasses, epic beard – that still tries to protest. But who cares about him, right? 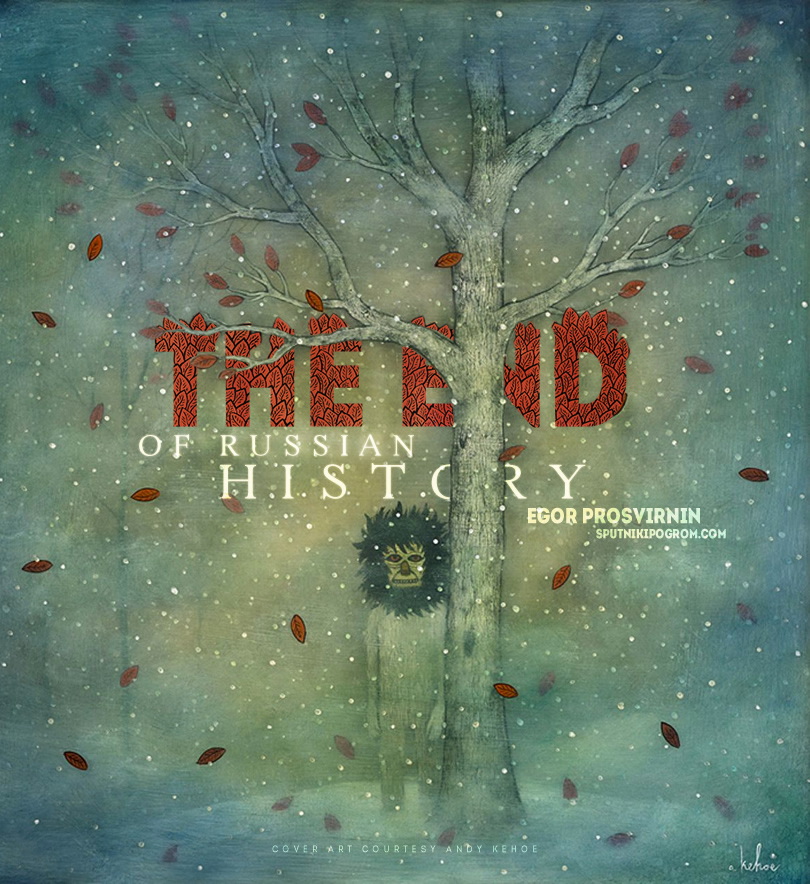