Earlier this week, the Ukrainian army performed an airstrike on the city of Luhansk. Seven people died, ten were wounded. Most of them were women, which makes it rather difficult to call them “armed separatists”. The aftermath looks like this (viewer discretion strongly advised):

None of the dead were armed, none of them wore camouflage. These are middle-aged women, women who would be incapable of warfare even if they wanted to. The Ukrainian media immediately started to lie and claimed that an anti-aircraft missile used by the separatists had hit the building. According to them, the missile’s heat detection hit the building’s air conditioning system. This obvious lie is instantly disproven by the fact that an S-8KOM missile’s thermal detection would need a temperature of 900°C to find a target. We know that the missile used was, in fact, an S-8KOM… because its remains were found next to the building.

OSCE reports on the incident

The Ukrainian government, in an attempt to cover up their crimes, came up with another story every hour – at first, there was an airstrike. Then, there wasn’t. Then, it was a MANPAD missile launched by separatists. Somewhere in-between it became an ATGM barrage and UAV rockets, but now it apparently has been staged.

On May 30th, Ms. Psaki said in her daily press briefing that “unfortunate incidents” happened which were, of course, not human rights abuse. She claimed the Ukrainian army “has shown restraint” in its operations. English may not be my first language, but I am rather sure that slaughtering middle-aged women in the middle of the day does not qualify as “showing restraint”.

Apparently, having a conscience is not a necessary qualification for working in the State Department. It continues to support a government that rose to power by killing policemen and beating MEPs into hospital, a government that stands on the shoulders of the barbarians who burned 50 people alive in Odessa, a government that pretended to have “elections” during a civil war. Yes, this is a civil war, not a “counter-terrorist operation” as the Ukrainian “government” wants us to think. I can hardly imagine a terrorist cell hiding in the center of Luhansk in the middle of the day. Imagining a terrorist cell made up of housewives is rather difficult as well. Whatever Putin’s role in the conflict, whatever we think of Russian foreign policy, there is nothing in the world that can justify an airstrike against unarmed civilians.

I am pretty sure the US government exhibits mens rea – it understands that supporting the “junta”, as the people in the eastern part of the Ukraine call it, is morally reprehensible. American diplomacy will gladly engage with thugs, criminals and neo-Nazis – as long as they are loyal to the USA and help “spread democracy”, for example by putting the vice-president’s son on the board of directors of a prestigious gas company. Yet, America knows that supporting these people is wrong and hates getting caught in the act.

This is not about foreign policy, or geopolitical interests, or even the right of nations to self-determination. This is about inhumane acts of government terrorism. The current Ukrainian “government” is waging war against its own population. It kills women and children, it bombs cities, it bombs schools and hospitals. There is no foreign army in the Donbass. There are people who are not willing to be ruled by thugs and neo-Nazis, people who do not wish to be bombed into submission by a criminal regime.

There is no political agenda to be planned. The situation is not about policy solutions for Ukraine anymore. Our goal must be to stop the bloodshed, to save innocent lives.

Of course, the Russian-speaking population in the region seeks help from Russia. Where else would they get it? The USA supports the people who murder their children and claim that bombing civilians is not a human rights abuse. Honestly, what did you expect? One may dislike Russia’s attitude towards human rights, or Russian foreign policy. But you cannot blame people who lost their mothers, sisters, wives and children to a brutal regime of terror for taking up arms and resisting. Especially if you are American, since that is how your country came into existence.

The Russian government is not doing anything, despite all the things that the media say. Putin left the Russian freedom fighters alone in their struggle against a tyrannical government. The Ukrainian government refuses to consider those people anything else but foreign spies. Elderly female foreign spies who were torn to pieces while walking their dog in the city center.

We cannot change the situation, only Russia and the West can. We can only send humanitarian aid, pray and demand of the international community to #SaveDonbassPeople 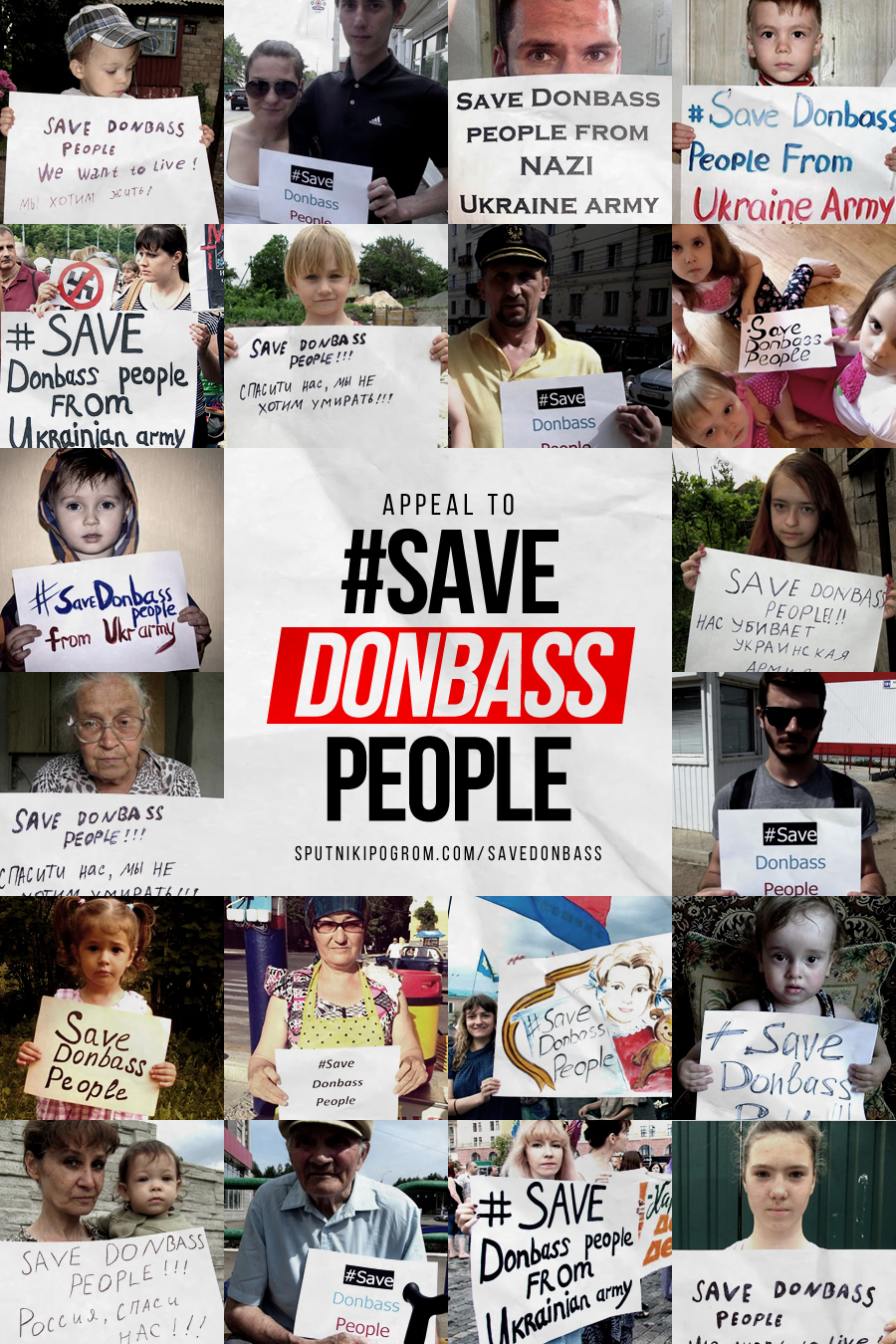