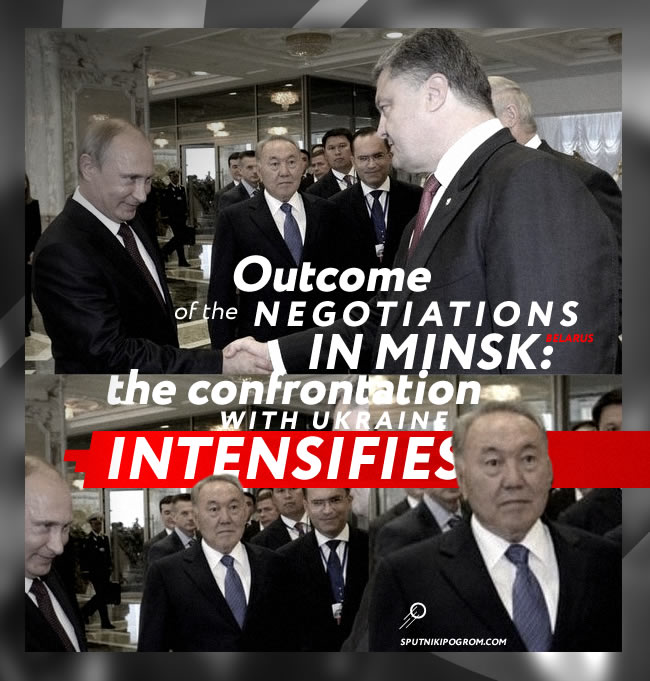 The best summation of the talks in Minsk is perhaps the news which came out at the same time as the negotiations were underway:

The Ukrainian cabinet of ministers at an emergency meeting issued orders to resupply the Anti-Terrorist Operation (ATO). The government then ordered the release and distribution of weapons and other military equipment from warehouses of the Ministry of Defense to reach all formations in the area of the ATO within two days. In addition the Cabinet has allocated 9.1 billion hryvnia for the needs of the ATO, and gave orders to repair and purchase all necessary military equipment from the State Armaments Concern “Ukroboronprom.”

Briefly, Poroshenko said that he will agree to any peace plan, taking into account and maintaining the territorial integrity of Ukraine. And the integrity of Ukraine is not only the Donbass, but also the Crimea, while the recognition of the Crimea is the main thing that interests Putin. Translated into plain language, “There’s no beer, and we’re not expecting any, so let’s talk weather.”

All in all the negotiations went something like this:

“We support establishing closer cooperation between the EU and the Eurasian Economic union, and start finding ways to enhance a process of integration”, — said Putin. “We emphasize, that we are ready to discuss any and all options, based on mutual interests” — he said.

Russia will be compelled to protect its market by eliminating preferential status for Ukrainian imports and apply a standard trade policy. “Russia cannot sit idly in this situation, — said Putin. — We simply must, and will, I want to emphasize, will be forced to retaliate to protect our markets.

This is done in full accord with the provisions of the CIS agreement on the free trade zone and WTO rules. We will be forced to cancel preferential status for imports from Ukraine”, — Putin said.

“The rejection of all CIS technical standards, replaced by adopting EU standards will cost Ukraine billions of euros”, — Putin said, noting that business partnerships with the states comprising the Customs Union in a number of industries will be lost.

“According to conservative estimates, the cumulative damage to the Russian economy alone could exceed 100 billion rubles.” — He said. “Feeling that impact will be major sectors of our industry and agribusiness with all the negative consequences for the pace of economic growth and employment”, — said Putin. “The losses will be also experienced by Belarus, and Kazakhstan”, — said the president of the Russian Federation.

Our article “War of Attrition: why Putin’s meeting with Poroshenko won’t achieve a thing”, published six days ago, was surprisingly prescient. Moreover, a meeting was held where new restrictions on trade with Ukraine were announced, in keeping with the “war of attrition” concept, and also raising the issue of RF’s direct losses the Ukraine with it’s Euro-association will bring (someone has to compensate for damages).

Therefore, the situation has not started to ease, on the contrary, the meeting in fact announced a new phase of confrontation and further closing of the Russian market for Ukraine.

We emphasize again that we’re ready to discuss any interactive options that are based on and take into account mutual interests. We are ready to exchange views on the current acute crisis in Ukraine, which I am sure will not be settled by further escalating the military scenario without taking into account the best interests of the south-eastern regions of the country, and without a peace dialogue with their representatives.

In other words, when you’re ready for a Ukrainian Khasavyurt then come, but for now here are some new trade restrictions to stimulate your thinking processes.

P.S. And he didn’t have time to complete the negotiations as:

Donetsk, August 26 — RIA Novosti. The government of the Donetsk Peoples Republic (DPR) will not agree to federalization, according to the Prime Minister of the unrecognized republic Alexander Zaharchenko.

“Federalization does not suit us. DPR will only consider its own independence from Ukraine … Novorossia not only doesn’t agree to federalization, but also preserving the present Ukraine as such ”- quoted by the official website of Alexander Zaharchenko (dnrespublika.info.).

Come on, Poroshenko, don’t be shy, talk with representatives of the East, they’ve declared as their goal the destruction of Ukraine! You’re for peace aren’t you? Lenin once said, in a similar situation: “Make it so it’s formally correct, but essentially sheer mockery.”