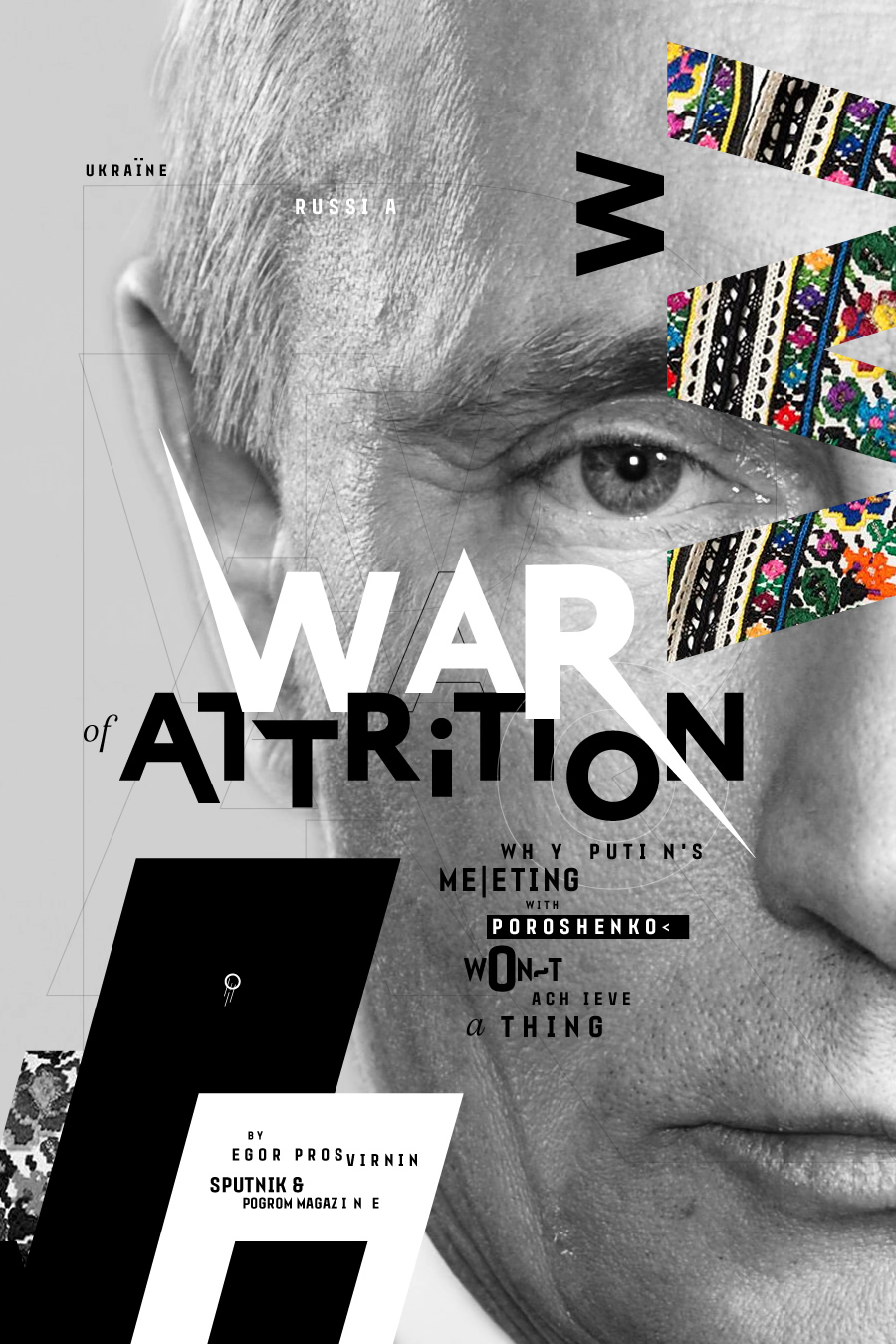 Poroshenko, Putin and EU representatives are scheduled to meet on August 26th in Minsk, Byelorussia. Young people, and naïve citizenry hold out some hopeful expectations for the meeting, but I’ll try to set out my predictions: no important agreements will be achieved (in this linear situational flow, however any force majeure events can change this greatly).

What does the Russian Federation need from Kiev?

Firstly, RF needs from the UkeSSR official recognition of the transfer of Crimea to the RF. The RF authorities realize that «illegal occupation of Ukrainian territories» will ALWAYS be an occasion for new sanctions by the United States and the EU. Therefore, RF needs a piece of paper from the Ukraine as «the ultimate armor» for the Crimea, which will remove the existing sanctions and give no reason for new sanctions. According to rumors, diplomats of the Russian Federation even have on offer the joint management with the Ukraine of Crimea in order to get this piece of paper. «Anything but put it in print, signed and sealed.»

Second, RF needs the federalization of the Ukraine with the Donbass granted special autonomous status, saving it as a bastion of Russian influence, free from Ukrainization and continuing to be part of the Russian World (that would torpedo all the Ukrainian initiatives the RF finds objectionable). RF authorities understand that in the event of complete Ukrainization they will have no leverage on the Ukraine, so for once they are truly interested in protecting the rights and freedoms of the Russian ethnic population.

Finally, the RF must ensure that the Ukraine is unaligned with NATO, the EU or the rest of the international alliances, it is in fact a sort of recognition that the Ukrainan is a protectorate, not entitled to an independent foreign policy.

What does the EU need? EU needs peace. The sanctions war between RF and the EU has already caused greater losses for the European economy than all the opportune benefits or perks that associating with the Ukraine might bring for the next ten plus years, and add to that those Ukrainian idiots shouting about «stop the transit of gas!» at which point the EU should begin to wonder at long last about those tiresome voices. The only thing that discommodes the Europeans is Crimea. By straightening the paperwork the RF can have a final, legalized annexation, and the EU will actually help create the first precedent in the XXI century for the successful annexation of a foreign territory in Europe, thereby putting an end to the paradigm of the «end of history», «eternal peace», and allowing for a continuing EU.

However, with the ascendance of chaos and problems with the Ukraine, the considerations of high politics will increasingly give way to the simple human desire to finally shut down this obnoxious circus.

What does the Ukraine need? Total military victory over the Donbass. Ukrainian society is in a state of frothing war hysteria, and acceptance of any of the requirements of the RF regardless, will be treated as a national betrayal. Moreover, even if the president of Ukraine Poroshenko decides on political suicide for the sake of the people living in the Ukraine,… any agreement with the RF is likely to lead to open rebellion by the Ukraine National Guard under the Ministry of Interior whose special battalions, currently numbering 10 000 people and replete with automatic weapons and armored vehicles. But even without rebellion and rioting don’t forget about the Ukrainian elections in October, which will lead to the destruction of any political force attempting to reconcile with the Muscovites and their “Moskali” conditions.

Therefore Poroshenko will only wage war, and Putin a war of attrition with the Ukraine, expectating that hunger, cold, and the exodus of the population will tone down Ukrainian war hysteria, return to Ukrainian society the ability to negotiate and reason. There are four problems with this clever plan to «Maintain the Donbass uprising, and wait for the Ukraine to run out of steam» and they are:

1) Continuing of the war means losing thousands of Russian people. It is clear that the brave Shoigu and Kurginyan don’t mind losing a bunch of palefaced Russian barbarians, but all the events in the Donbass have every chance to achieve genocide status, genocide of Russians.The fact that thousands of Russians have been killed sets a multinational ministry of foreign affairs tut-tutting concernedly (coupled with newly achieved reports on increased spending on defense industry) will contribute to the further alienation of Russians from the multi-ethnic state, saying «You did not protect us.»

2) Millions of refugees, not only from the Donbass, but also from other regions of the Ukraine. As the economy of the Ukraine stops, job cut, rising prices for everything while communal services collapse, then the idea of «Lets go to those cursed Muscovites» will become more and more attractive. We can create several million jobs by deporting unskilled illegals from Central Asia, but that would be a temporary solution to the downturn of the economy and growth in the flow of refugees. Already in our southern regions the refugee crisis is acute, and that’s still summer with the Ukrainian economy still running. What will happen in winter, when just across the border masses of people will flee real hardship, but to where…. nobody knows.

3) Total destruction of the Ukranian economy through war, ultra right-wing rioting, property grabs, Russian economic sanctions, blockade, and other energetic events will significantly reduce the value of the Ukraine. It’s one thing to get control of an almost-Poland — and quite another thing to get control of an almost-Somalia, with the need to ensure the survival of nearly 40 million people. The drift of the Ukraine heads downstream, sinking towards being more accommodative, and therefore less valuable, drifting from the status of a developing industrial cluster to having the status of a negative asset. Sort of like marrying the prom queen when she was 18, or marrying her when she’s 60 – these are two slightly different achievements (although the “She’s mine!” is technically the same thing).

4) When comparing the Ukraine with the Third Reich, we should not forget that the Third Reich fought to the end. Ukrainian nationalism, unlike the stillborn «rossiyanstva» of Tishkov, is a real siren song with a powerful sense of loyalty — therefore it is quite possible that in the freezing streets the Ukrainians last effort will be to utter in their death-rattle «you dare to make peace with the Muscovites – I’ll grind you between my teeth!» In this case, a «war of attrition» will result in a «war of annihilation», followed by what little might remain of the Ukraine. Having a huge land border with this Somalia of forty million – is not the gift left to be appreciated without a very specific worldview. The Ukraine has proven stronger than expected by all participants of this reality show (including the organizers of Euromaidania), and one should not exclude in calculating-in the possibility that the winter will not bring obedience and humility, but a Volkssturm of thirteen year olds.

In this regard, as a Russian nationalist, in an effort to save Russian lives and prevent a humanitarian disaster, I would suggest that the Russian Federation send in the troops and annex the Ukraine while there still remain pockets of a working economy on its territory, and its population has not reached complete madness, or achieved the heights of military brutality, enabling them after some rehabilitation, to theoretically be able to participate in productive work. There is no doubt that such a move would lead to international isolation of the RF, and the Russian Federation morphed into a besieged fortress, but in my opinion the costs of this will be far less than a humanitarian catastrophe involving 40 million people.

RF did not expect such a response from the West over Crimea, it showed very weak strategic planning. Now I suggest we direct our attention to this subject, and think about what we are going to do with forty million “Chernobyl-ites”, not in a year, but in just a few months.

At the same time bearing in mind that giving up on separatist Russian positions in the Donbass will only refocus the Ukrainian war hysteria onto the Crimea. So then; occupation and annexation – it’s the only chance to neutralize and render this reactor harmless before it blows.