Dear readers, we offer you a translation of an award-winning article published on Russia’s most popular conservative blog Sputnik & Pogrom following the news of $15-billion bailout offer made to Ukraine by Vladimir Putin.

The piece, authored by our permanent contributor who writes under the name of Russia’s 19 century ultimate fictional badass Rodion Raskolnikov became an instant viral hit with thousands of views and hundreds of likes and shares all over the Russian segments of Facebook, Twitter and VK. Experimenting with frivolous agony aunt letter style magazine writing, Raskolnikov narrates an astounding and heartbreaking story of Russian-Ukraine relations made of agonizing love and ruthless betrayal.

Unfortunately, due to the most trivial of constrains we are not currently able to translate more materials, so today’s «Men are from Mars, Ukraine is from Maidan» is envisioned to bring you the best glimpse at endless sardonic riches of Russia’s most popular conservative blog. Hope you enjoy! 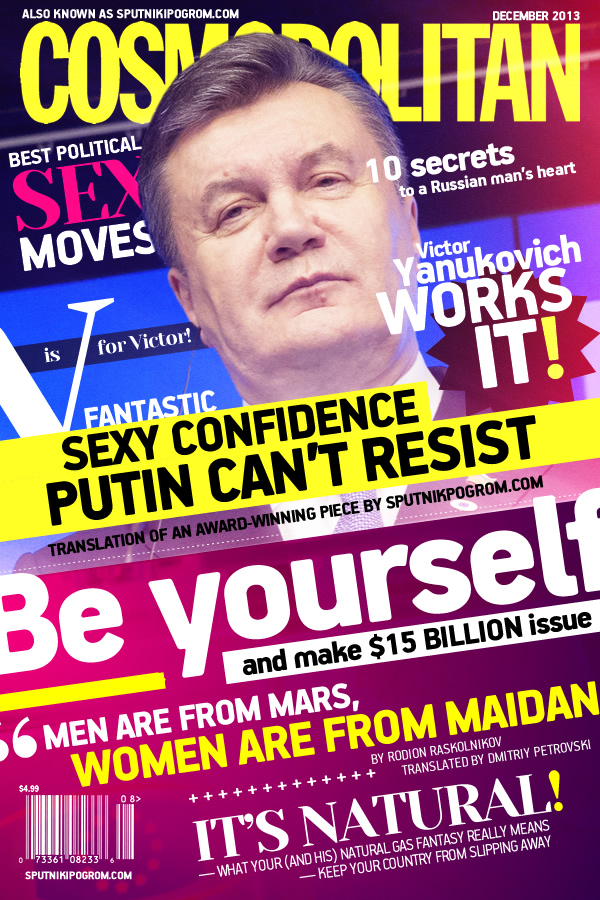 Do you even remember the last time your geopolitical partner gave you a truly expensive gift? Christmas? The Eighth of November? The CIS Summit? …never?

How to squeeze your Superpower for a new fur coat, a car, or simply an unprecedented discount on gas – this and so much more in our new S&P category, “Relationships”.

Ukraine, 22 years old, from Eastern Europe writes: “Dear S&P! I don’t know what to do! My friend Chechnya is awash in subsidies for trendy skyscrapers, my other friend Poland enjoys the embraces of two superpowers at once, while my GDP is dropping and has nearly reached the level of El Salvador. What am I doing wrong?!”

You wrote, “I’m so jealous of Poland! She dates the EU and the United States at the same time, and all I get is a damn Russian dork! It’s been quite a while since he gave me Crimea, and you know, I’m a modern gal after all, I deserve a soft loan at least as good as the neighbours’!”

Look, there’s no need to be ashamed of your needs. “Love in a cottage” – or in your case, in the Customs Union – is nothing but an old fairy tale for the bumpkins in Kazakhstan. You’re free and emancipated – you have every right to demand expensive, upper-class gifts from your partner.

If he’s got the money for rearmament, the Olympics, or a party with his hunky G8 friends, then he’s definitely got something for you. Hey, you’ve been together a long time! There’s nothing indecent about pulling a few tricks to get the gifts you deserve!

Let us analyze what you wrote, “Of course, the Polish economy is doing really well and Chechnya – that skank – constantly threatens him with terrorism, if he looks at someone else. As for me, all I ever had is a once-flourishing agriculture, and now, well now, there’s almost nothing left…”

My dear! You have a big problem with your self-esteem! Of course your friends are enjoying themselves! Poland is smart, intelligent, and knows how to make herself appear indispensable, and Chechnya, well she just turns on her hot Southern passion!

So let’s get down to business. For starters, don’t bombard your partner with your demands all in one go. Whereas a romantic would surrender immediately, a pragmatist might just annex!

You wrote, “Sometimes I think my youth is over. I rank first in Europe for AIDS and per-capita alcohol consumption, my productivity is among the lowest, and my industry is all but gone. And corruption has ravaged my being…”

Oh, oh, oh my darling. AIDS! OK, this is serious. Where on earth did you manage to go and catch that? Now listen – don’t tell him about the AIDS or about the corruption. Some geopolitical partners take such things all too seriously, let this one remain just between us, all right? As for your industry – don’t you worry, we’ll make him get you a new one, how’s that?

You need to show him that you are serious. Be strong, be unshakeable. Start off by just taking some of the family gas and spending it on yourself – let’s see if he protests.

If this doesn’t work, don’t fret – there’s an age-old approach that will silence any miser. Simply stop supplying him with your sweet candy. Of course, there’s a chance he doesn’t care for your candy all that much, and he’ll just stop eating at his home economic region.

No problem! Remember those guys that go out with Poland? Start going to their parties! Yes, we know you’re not cool enough for them — but your partner may not be aware of this, for he appreciates you so much more than they do!

Be sure to come home a few times early in the morning, all dishevelled and in a revolutionary mood – answer all his questions evasively. “Yes, I spent the night in Brussels, yes it was fun, I’m soooo tired”. And voila – he’ll conclude that you’ve got a new partner in Brussels, even though you don’t!

And this is the time to apply pressure on his weakest point. Simply refuse everything. Deny him a geopolitical partnership. Don’t say it’s because he didn’t give you money or gifts – invent plausible excuses: a headache, a Holodomor (man-man famine), or just say that you’ve got nationalism today in Lviv. It won’t be long before he surrenders!

If nothing else works, try this – make a Maidan for him! That is, gather all things, and declare that it can’t go on any longer, and that you’re going off to be with Europe forever. You might casually mention an association agreement a few times. Even the most insensitive partner won’t endure that – superpowers can’t stand the competition.

Be sure not to overdo it though! We both know that the EU already has big problems with Greece, and certainly doesn’t need another mistress. Our goal isn’t to destroy your marriage after all these years, but simply to get more attention from your partner. Flirt as much as you want and with whoever you want, but remember – you will always come home to him.

Try focusing on the positives in your relationship. Yes, it’s true, you’ll never be able to completely get rid of all the other countries in his life. But you’ll always have the little things that connect you – after all, you’re the old companion who’s always supported him (well, except for that one time with that Swedish king, but that doesn’t count – who among us wouldn’t fall for such a stylish Scandinavian?).

And truly, if he really wanted to leave you, he would’ve done it a long time ago, in the time of Bohdan Khmelnytsky. It’s quite clear that he has a special special place in his heart for you – but geopolitical power-centres don’t show their feelings all that easily.

Finally, to be quite frank, dear Ukraine, where else will you find a guy who tolerates your Maidan, gives you money before a possible default and might even overlook your little AIDS problem? He accepts you for who you are and most importantly, he offers something no smooth-talking foreigner could ever give you – reliability.

And fifteen billion dollars, of course.