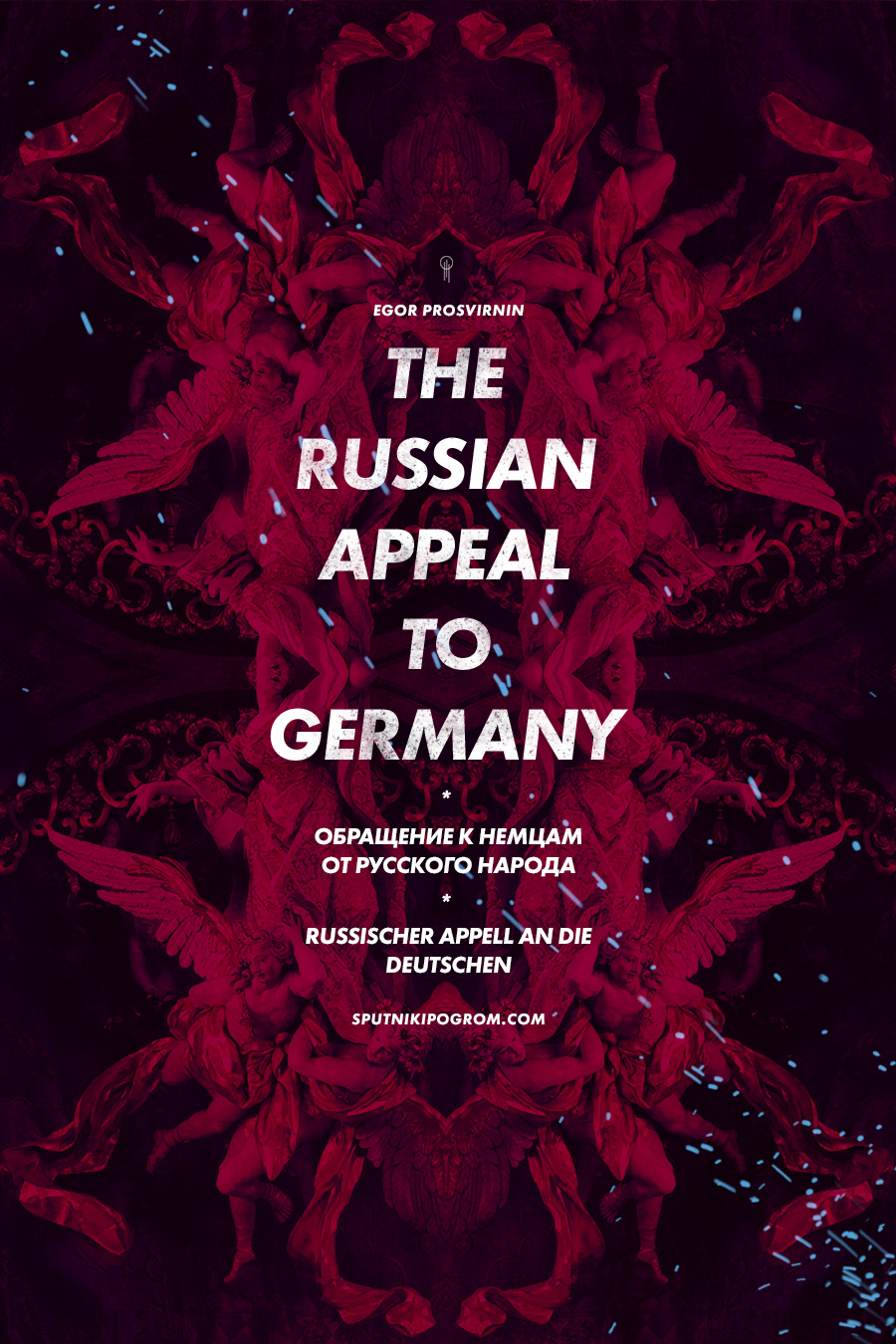 My name is Egor Prosvirnin, I am the chief editor of the Russian site www.sputnikipogrom.com which advocates European values. I’ve heard that one of the aspects of life that Europeans, and Germans especially,cherish is history. If we were to recall recent history, we would remember that a vast army of 300,000 Soviet troops along with 5,000 tanks, 1,500 aircraft and 10,000 artillery pieces (including tactical nuclear weapons) simply left the then just-united Germany without firing a shot.

It was an operation unprecedented in scope and brevity, when the entire Soviet army withdrew literally to open fields. Tens of thousands of Soviet officers, obeying the orders of the supreme command, went from their warm barracks to live in moldy tents set up in the middle of sodden snow-covered fields. In many instances along with their families.

For hope. Hope that the dark pages of history between our two countries were finally and forever past. Hope that we no longer have to keep armies of tanks in the center of Europe, and that Europe would respect and consider our interests. Hope that in a united Germany we would have a good friend and ally, with whom Russia would fulfill the dream of Charles de Gaulle of a united Europe stretching from Lisbon to Vladivostok.

When our armies were leaving Germany, our soldiers were told that Germany had recognized and redeemed its mistakes of the past, there were no undecided issues with Germany, and that we would no longer hear German voices calling for retribution against Russia, therefore we did not need our Army of tanks positioned in the middle of Europe.

From that moment, Russians and Germans were friends, and friends have no need for vast armadas of armor and tanks. Russians should cease being afraid of a united Germany and disarm.

And we disarmed. And for 20 years we felt that we did the right thing, that the past is forgotten forever, and that the Germans appreciated how readily we closed all the bases and brought all the troops home (although there are American bases in Germany to date). In good times our friends know us; in troubled times we come to know our friends; and troubled times did come via the Ukrainian crisis. It became clear that the Germans do not remember the good. It turned out that the Germans did not learn the lessons of history, it seems that the Germans viewed the voluntary dismantling and withdrawal of our war machine not as humanism and goodwill, but weakness.

It turns out that when the Americans spoke loudly and sharply with the German chancellor, whom they for all these years have kept under surveillance like some sticky-fingered housemaid, the entire German society leaped up like a submissive dog running obediently to its American master…. even when the conflict with Russia goes against German economic and political interests. It seems therefore that if one blunts their sword, removes their armor, ceases the Soviet-era preparations for World War III, and is reaching out to the Germans, the Germans will spit in your extended hand at the first opportunity.

It turns out that Russians are yet again “Untermensch”, who can be savaged with impunity on the pages of the German press and punitive sanctions demanded from the rostrum of the Bundestag, while disallowing an opportunity for Russia to openly and equitably argue its case. It turns out, however, that the Ukrainian government can without any liability prohibit the Russian language, jail Russian activists, target residential neighborhoods with volleys of artillery, kill thousands of civilians who happen to be mostly Russian — and that’s OK. It is OK because it’s a “democracy”, and it suits Germany because Russians are “Untermensch”, because Russians are Jews whose blood for Germans is worth nothing. And what’s more, for trying to defend themselves, for attempting to return fire against the Ukrainian armed forces, Russians should be punished, publicly harassed, their will to resist broken, and then forced into an international Russian ghetto.

Then burn that ghetto, as the Trade Unions building in Odessa was burned with 49 pro-Russian protesters inside. Do you know how the Ukrainian social networks responded to this holocaust? By referring to the dead as «Colorado Shishkebabs»({{*}}) — this is what tens of thousands of people in the Ukrainian social networks wrote, including indecent sayings copied into photos of the charred bodies.

We are again the subhumans, we are again nothing but animals that Ukrainian Nazis may kill with impunity, creating a “Russian-frei Ukraina”. According to the data collected by Human Rights Watch, only during this past July the Ukrainians killed one thousand one hundred fifty PEACEFUL RUSSIANS in the eastern part of the country, and these killings continue daily. Where are your protests, Germany? Where are your sanctions against Ukraine? Where is your vaunted humanism that you profess to have learned since 1945 by recognizing the errors from your past?

Saur-Mogila, which is located on strategic heights and is a memorial to Russian soldiers who died there 70 years ago during a fierce battle with the Wehrmacht, has once again been stormed. This time by the Ukrainian battalion «Azov» wearing their Wolfsangel patches, a symbol of the 2nd, 4th and 34th SS divisions, and you are silent! Russian militia are ducking behind the granite statues of Soviet soldiers from neo-Nazi bullets fired by «the National Guard» of Ukraine, and you dare to agree with the American nonsense about «Russian aggression»! Ukrainians shoot cities with ballistic missiles, leaving craters in places homes once stood, and you impose sanctions not against Ukraine but against Russia!

Again, troops are killing unarmed Russian civilians, and you are debating whether it is time to start delivering weapons to these murderers so that they can kill more Russians? All of your vaunted «politics of memory» and «learning from the past» is simply a pile of dog shit, as again before your eyes unarmed civilians are butchered, and you applaud this and promise these Ukrainian murderers fresh financing.

You are slaves who think good is a weakness.

In 1934, Hitler drove you like sheep, and in 2014 Obama is your shepherd. If tomorrow in Germany, the Americans open a concentration camp for Russians, half of you will immediately submit their curriculum vitaefor jobs as operators of the gas chambers, and your press will start to explain how this camp is patriotic and good for the German economy. It would then follow that killing these Russian “Untermensch”, crafting lampshades out of their skin for daring to resist, and sending this nicely packaged to Washington to please your American ally.

Germans have failed their test. When Evil has returned again to Europe, you do not even attempt to resist it, and immediately fall prostrate at its feet like a slave after the eagerly-awaited, long delayed return of your master. Serve Evil, impose sanctions, support the murder of Russians, supply weapons to the killers of Russians, justify this genocide — the end of your story will be familiar, because Evil cannot win.

I will conclude this text with a popular quote from the famous American stateswoman Ms. Victoria Nuland, who obviously makes the decisions in Ukraine instead of your Chancellor:

Like it or not, but admit that the Americans are a smart people capable of accurately determining the “price” of a united Germany and a united Europe.

[[*]]Refers to The Colorado Potato Beetle which has a black and gold carapace. The “Colorado Shishkebab” refers to the black and gold St. George’s ribbons worn by many of the separatists and their supporters as a symbol of loyalty to their Russian cultural heritage.[[*]]