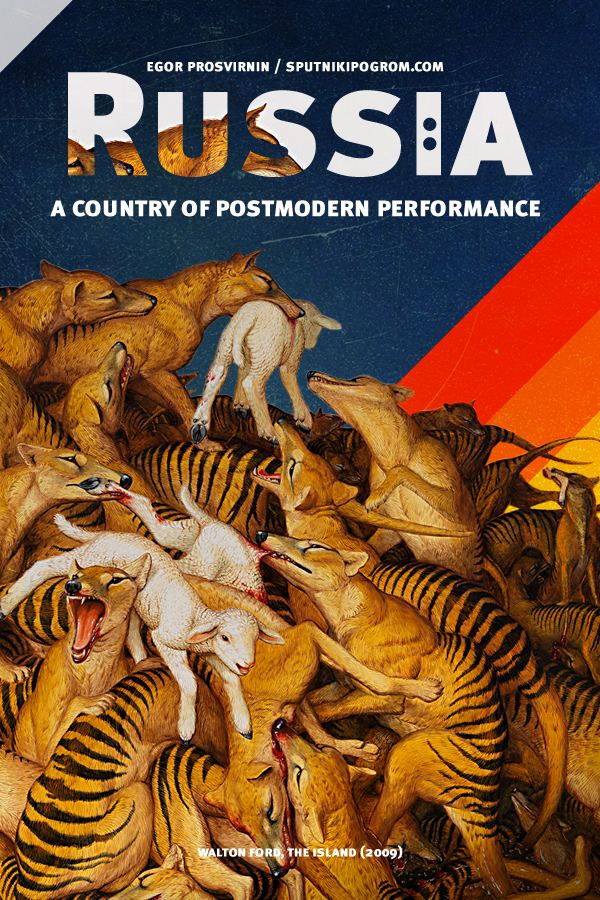 The main rule of life in Russia: there is no reality in Western understanding. A Western correspondent observing Russian life, what does he see? He sees an Orthodox zealot demanding to burn down all gays. He sits down and writes the article, ‘Orthodox fascism rising in Russia: the way to Iran’. A Russian does not see the religious orthodox zealot. He sees Mr. Tsorionov, Ossetian, who was recently a Buddhist, the organizer of rave and pagan festivals, who was suspected to be an LSD-dealer. Or maybe he sees Okhlobystin, the trash-showman, who likes making performances in his white cloak on the top of white pyramid, but who can hardly make any difference between Jesus Christ and Damien Hirst. Maybe he stares at openly gay Vladimir Zhirinovsky, with his sauna reality show with young boys not stopping him from demanding to hang all gays.

The culture of religious totalitarian reaction, which is the Western view of the situation, crumbles for any Russian to the remains of total hypocrisy culture. The society of performance, where actors are not only the authorities — oh God, there is no place in the world where authorities do not lie to people! — but all the nation, including people of even simpliest social background. Our uniqueness is not openly gay Zhirinovsky hounding gays from political tribunes — I suppose such persons exist worldwide — our uniqueness is in the population pretending to believe Zhirinovsky and his sauna-based indignation, but at the same time understanding everything about this person. A ritual exchange of ideological greetings takes place, a ritual ideological performance like a Kabuki play, where every movement has a number of meanings, is strictly regulated and sharpened with years of training.

This is not Putin-style. It is Soviet. The 70 years of obligatory Party meetings, with their reports, sessions, ideological cells, has made people believe that there is no connection between the formal-political and the real sides of life. You must put on the mask, go on to the stage, make some ritual pas («Oh, we do believe you, sir Zhirinovsky! Crush the hidden gay mafia, our gallant Orthodox knight! You’re our last hope in this gay-infested world of underground saunas with underage boys!»), after which you can come back to you normal real life. Ours is a Barbarian state in the eyes of West: vodka, vatnik, balalaika, Kalashnikov, but the reality is that the 70 years of total hypocrisy (a dangerous one — the wrong pas in Stalin’s USSR could cost you a life) has made us total Byzantines, with double- or even triple-thinking.

We are a society of postmodern performance, and opposition rallies of 2011–2012 were a revolt against this postmodernism, an attempt to escape from a political ritual to a new sincerity, to make a meaningful dialogue instead of a ritual contact. The attempt which instantly became a second level performance, conjured to reality of conjured reality of Russian reality. There is a desert of ice, where a dangerous man from Muslim Caucasus region roams in with a golden gun, and somewhere, in the skies over this desert, the performance ‘The Putin’s authority’ takes place, and inside this performance, actors start playing a new one. This performance has caused the performance of a third level, ‘performance against protest performance against the need to play in the first level performance, which is at the same time the part of them both’.

You are expected to be confused at this place, which is part of the performance made by this text. The idea is that we live in independent and constantly shifting political ideological realities which have no relation to the objective reality. The law prohibiting gay-propaganda is supported by 90 per cent of Russians, 130 million people. The meeting to support this law counts 50 people. The ‘Puting’ (sounds similar to meeting, a pro-government political rally) can forcefully gather 500 people, but the conscripts do not feel any disturbance, the political hypocrisy is an organic part of social role for them. As well as soldiers, when forming lines, do not resent that they are forced to march. The words, the mottos, ideologies and meanings are so far away from the facts at which they point, that they themselves become symbols. The political life has completely moved to a symbolic reality, and even the revolt of audience was instantly shown as a part of the performance.

Foreigners who are used to connect words with actions describe our reality as five-year-old children. ‘Putin announced that he will improve traditional values’ — a foreigner hears Iran here, a Russian hears federal grants to Islamic Chechnya. The triple-thinking has become out natural way of living, and any attempt to break it off (including mass unrests) causes fear and abruption. ‘Leave me at the Matrix, I feel good here, here we have Mizulina, we talked about the elegant poetry of morality and ethics, having at least five different meanings, including ‘My children live in Belgium and I don’t give a fuck about you, Russian peasantry, forced to live by my laws’.

The success of ‘Sputnik and Pogrom’ is in abruption of this ghostly symbolic Byzantium existence in second and third level Matrixes, we refuse to take part in the performance, to accept all those ‘presidents’, ‘ministers’, ‘opposition’, replacing the dead double-thinking symbolism with the new alive national feeling, emerging in acts of absolute new sincerity — pogroms. Russian nationalism is life breaking into the frozen death of an eternal-performance society. The producers still succeed in including suddenly emerging hordes with pitchforks and torchlight into the performance, ‘those are special effects’, but the montage is becoming worse, and the grumble starts at auditorium. Birulevo is too alive and full of blood to present it is as another double-crossed political manipulation by the enemies of Russia. They are no enemies, they are simple folk who want simple things: to live without literal backstabbing from the shady ethnic characters, and be presented as regular people, not as a some symbols in a new complex Kremlin political play.

The long, exhausting and ritual 90-year-old Asian Kabuki performance is at an end, and Soviet RF-society is destined to fall, as well as the Imperial China has fallen with its great tradition of ‘Beijing Opera’. ‘Putin’s Russia’ does not exist as real, and every murder, every pogrom, every pain, striking the very body of the nation, helps us come back to reality out of someone’s dreams of darkness and madness.

Russian nationalism can offer the most important value as a proof of its authenticity — the pain. The others can offer nothing.